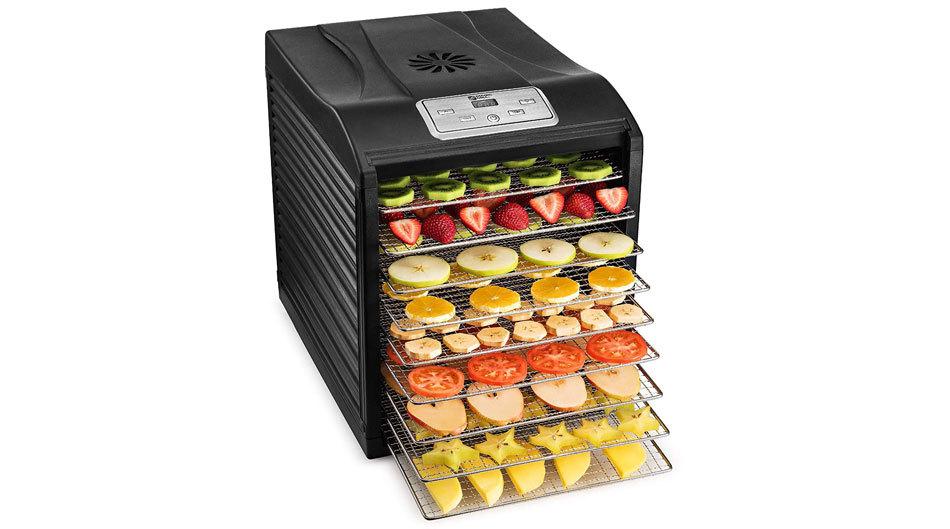 Food dehydrators are easily one of the most trendy kitchen appliances out there today. Since they’ve been featured on prominent online cooking networks like Bon Apétit & countless others, droves of amateur & professional chefs alike have started the search for their very own.

So how do they work, exactly? Well, to keep it short, dehydrators are made up of a heating element fan, vent & trays.

They come in two arrangements: one involving stacking trays, and other utilizing shelves. Stacking trays are nice, in that they have a larger capacity than their shelve-having peers, but you have to remove the top trays to check on the state of food in the lower ones.

With the shelves, even though you have to stick to smaller batches, you’re in a far better position to keep an eye on everything you’re dehydrating. For that reason, while there are fine options in both categories, we recommend sticking with the shelves.

When using a dehydrator, you’ll cut the food to be dehydrated (jerky, fruits, vegetables, etc.) into even pieces, distribute it onto the trays, shut the door of the appliance & get it started. From there, the heating element turns on & the fan helps circulate air through the vents, thus beginning the dehydration process.

After it’s done, you’re left with smaller & dry versions of the foods you put in, and you’re ready to start snacking away on some tasty dehydrated foods.

But why do this to food, to begin with? Well, for starters, it makes foods like fruits & vegetables last much longer than they usually would, all while maintaining the standard nutritional content of the food.

Along with that, it makes these foods more portable as well. If you’re going on a long hike, for example, and want some food on the trail without worrying about it getting squished in your bag, taking out the moisture makes that a non-issue.

As it goes with trendy items, legions of competitors have stepped up to the plate to cash in on the trend, and some have taken more care to deliver a quality product than others. They come in all sorts of designs as well, and while some can turn out quality results, others have inherent flaws that greatly affect the quality of the food coming out of them. 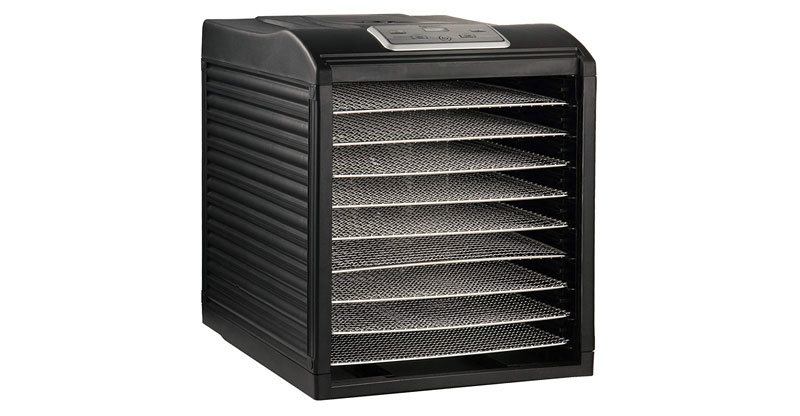 For those reasons & more, not just any food dehydrator will do. No, you need to find one that’ll take on whatever you throw into it (within reason), and stand the test of time through it all. You need a dehydrator that’ll do it right the first time, not the second or third.

In other words, you need a Magic Mill Food Dehydrator.

There are two main reasons why we consider this one of the best choices you could make for your kitchen: simplicity & functionality. The Magic Mill Dehydrator is built in a way that would allow even the most novice chefs to operate it with ease while offering professionals everything they need to get their food dried quickly & correctly.

There are only five buttons on the face of it: the timer, two for setting time & temperature respectively, an up & down arrow, and the power button. No fancy settings, no buttons you’ll end up ignoring, just the bare necessities. 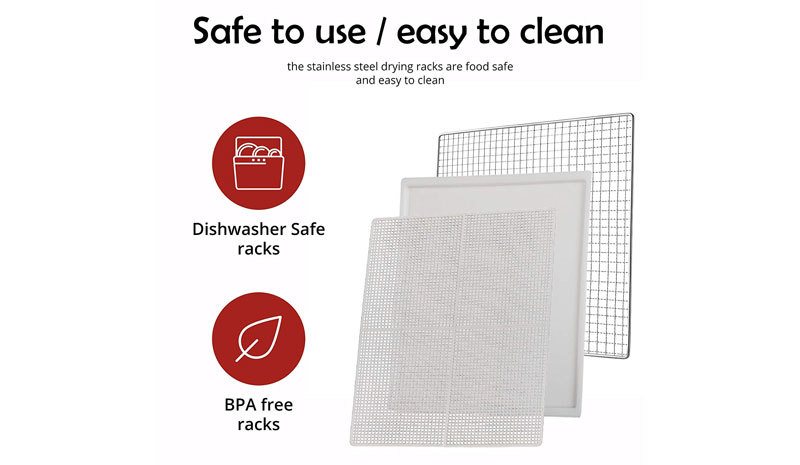 To show you just how easy it is, let's walk through what happens when you dry your food in the Magic Mill Food Dehydrator. Say you've just sliced up some apples that you want to turn into tasty bite-sized bits for your big backpacking trip tomorrow.

Once you cut your apple into even pieces, you can pull out one (or more) of the included stainless steel trays, distribute the apple slices evenly across, slide the tray(s) right back in & shut the door. Press the temperature button, set it with the up & down arrows, and do the same with the time.

"Then what?" Well, wait! The dehydrator will begin heating up, and the circulation system will start getting to work. As the rear-mounted fan spins, the heat begins distributing at a flat rate across every part of your future snack, and the vent on top starts doing its part to keep the dehydrator from overheating.

Even if this does occur, which is extremely unlikely, the Magic Mill has a built-in overheating protection system that automatically turns on when things get a bit too toasty.

“I’ve heard that I have to flip the trays with these types of appliances, is that true with this one?” Fortunately, no! Their special heat distribution system, while drying everything evenly, eliminates any need for you to open the door until it’s done, especially considering it’s see-through.

If you want to take a really close look, you can do brief checks on foods that take more time to dehydrate, but opening the door for longer than 2-3 seconds is ill-advised. 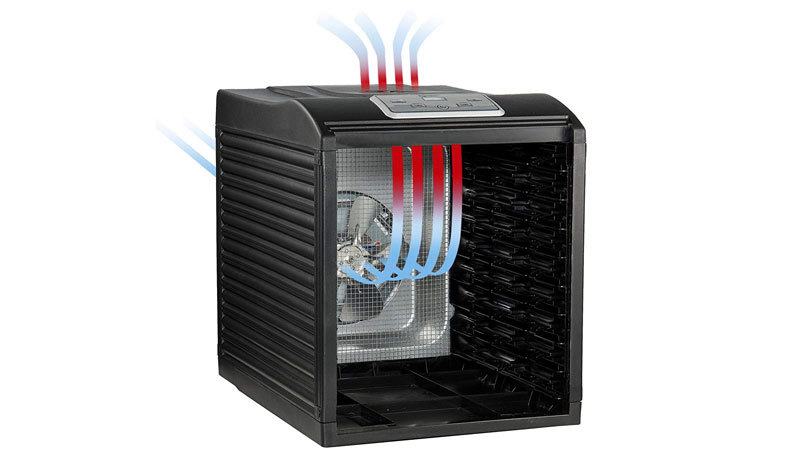 To make the deal even sweeter, no matter what you’re making in there, you can take it out with the complementary set of oven mitts that comes with the dehydrator as well.

The Magic Mill Food Dehydrator comes in three sizes, each fitting six, nine & ten trays respectively. You can get the six tray option for less than $130, the next largest goes for just under $160, and the biggest of the three will cost you right below $200.

We know it’ll probably be one of the more expensive things in your kitchen, but we’re confident it’ll be the least disappointing. Don’t listen to us, though, listen to the 77% of Amazon customers that gave it a perfect 5-star rating, averaging in at 4.5/5 stars overall.

So what are you waiting for, exactly? Order it here, and let us know what you think! Happy dehydrating!

As an Amazon Associate I earn from qualifying purchases. 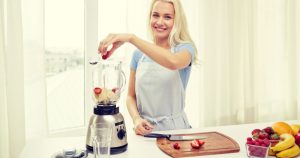 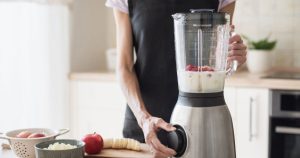 Why Is My Ninja Blender Blinking Red? The Ultimate Guide 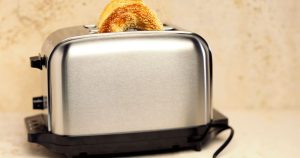 How Long Do Toasters Last? Everything You Want to Know 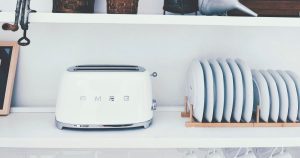 Why Are Smeg Toasters So Expensive? Everything You Need to Know 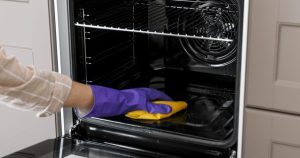 How to Clean Toaster Oven Trays: A Guide

Sign up here to get the latest news and updates.